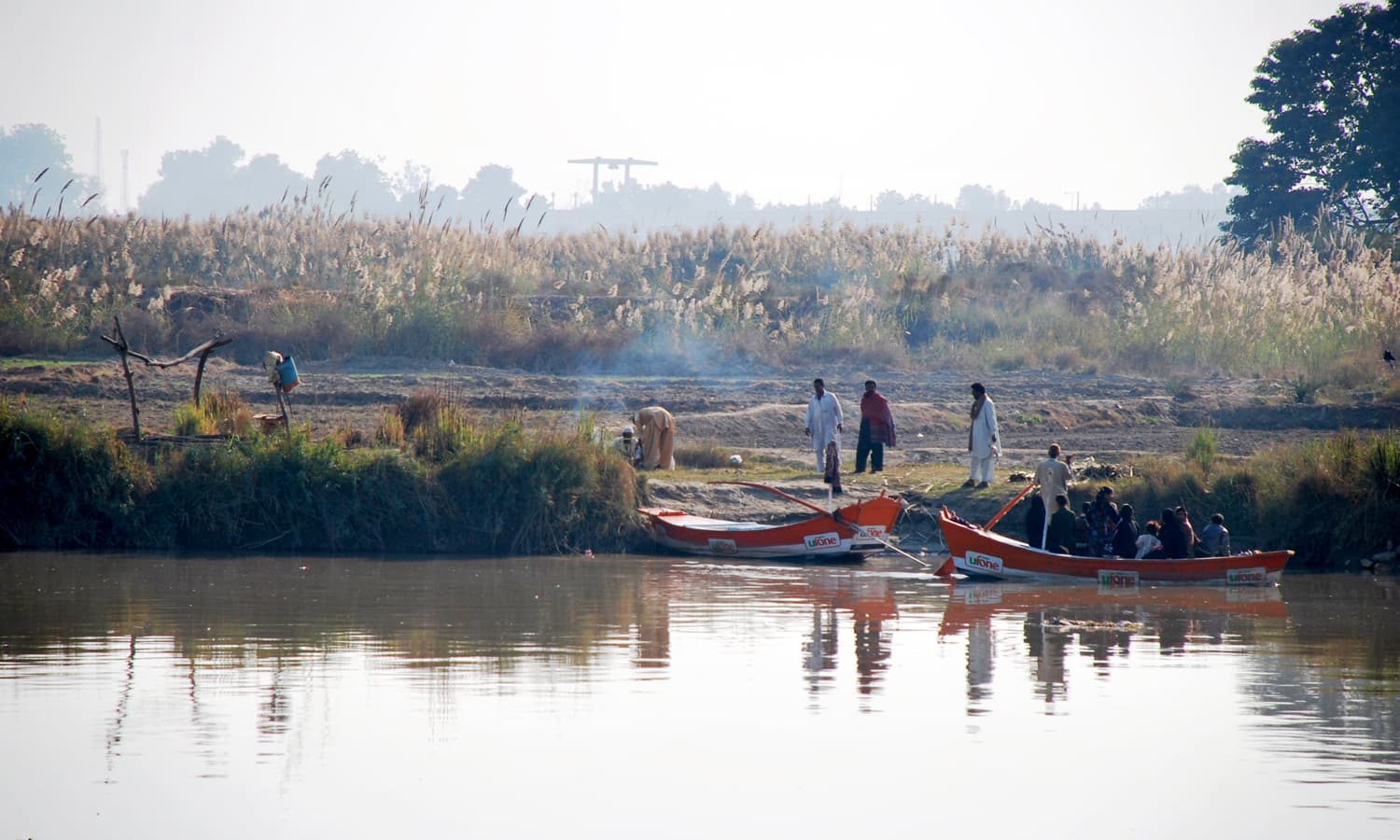 The sun was setting as me and my awkward trio of a novelist, a hunter and a CSS officer enter into Sukkur and decided to make Sukkur as a rest point on our way from Karachi to Lahore. This was the place where I spent my childhood so I insisted on having a day to through the city for sightseeing and some revival of the old memories. Others weren’t very keen on this decision as they find these dry and barren lands boring and empty.

Sindh, though many may consider is as ‘dry’ land actually derives its name from the Sanskrit word “Sindhu” which means ocean which takes it metaphor from the glorious river that flows through Sindh and gives life to this country. The river`s glory has been amplified through the construction for barrages in Sukkur.

The city reflects the traditions and architecture of the British regime while the city has flourished a lot during the British rule. The constructions of barrages and firm railway roads have made a strong position of Sukkur as a point of economic threshold and bureaucracy in Sindh. 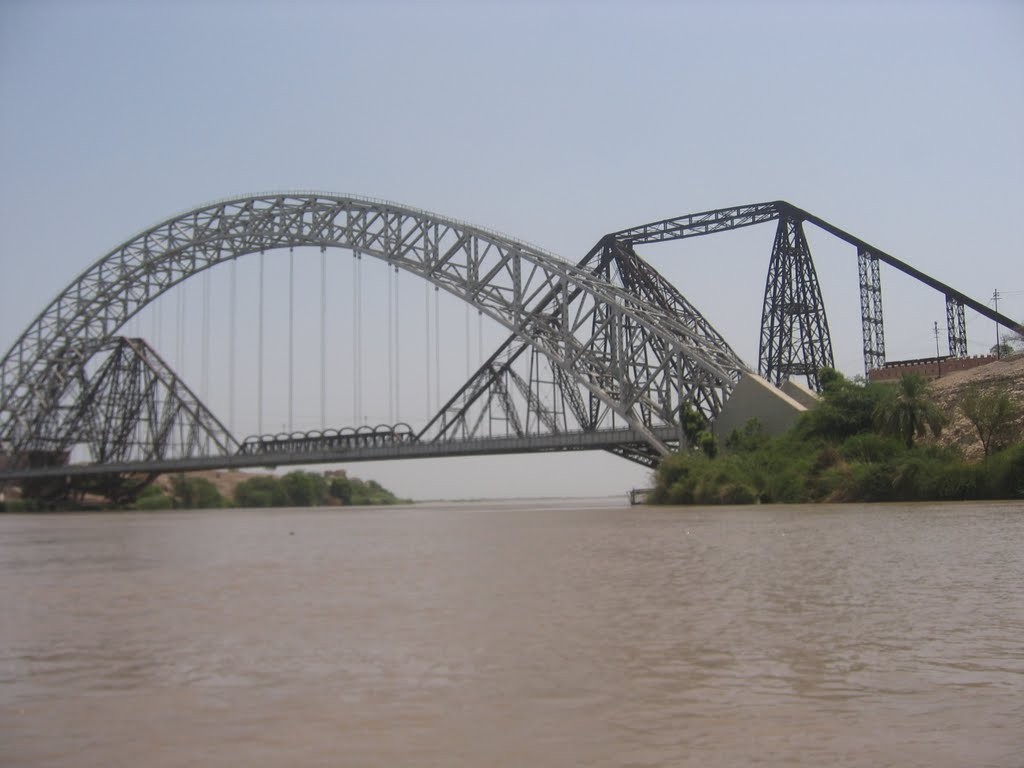 The Sukkur barrage is an engineering trophy with a marvelous length of about 5,000 feet which was completed in 1932 with an estimated area of about 10 million acres that is irritated by this barrage through seven canals.  The barrage brought an era of establishment and progress in the region which attracted habitants of the other provinces to come settle in Sindh.

The different regional and ethnic groups in this area are much different than in other parts as they blend in together very well, living the same lifestyle and speaking with the similar dialect.

Some other attractions and beautiful places in this city include Lab-e-Mehran which is a family park for the citizens of Sukkur. It is a walk along the left bank of the river where people enjoy with food stalls and boat rides as well. We had a chance to settle at a guesthouse in the irrigation colony which was from a British era but it was quite empty barren due to renovation. 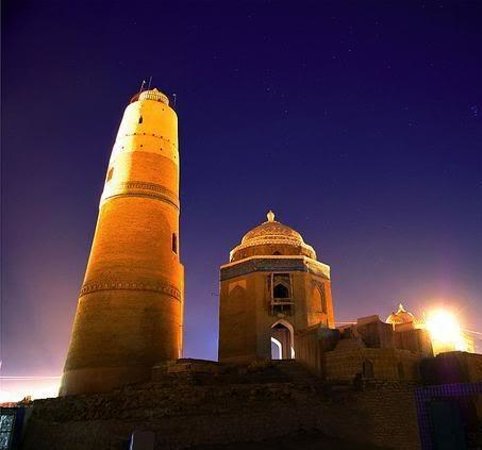 Our first stop after a diverse breakfast in the dining room was Masoom Shah Jo Minaro. It was once a watch tower under the rule of the governor appointed by the Mughal Emperor Akbar, Masoom Shah.  Later we went through some crowded lanes and reached Neem ki Chari which is a very busy bazaar at the center of the city. The boundary wall entrance is through a narrow opening, we enter the boundary through the crowded busy shops. It was told that the tower was commissioned in 1582 by Masoom Shah but during its construction he passed away and was buried alongside the incomplete tower. Families come around to relax in the compound which also has a graveyard alongside the tower.

The tower`s completion was soon finished by Masoom`s son in 1607. The tower is said to be almost 84 feet high consisting of 84 steps. We turn to climb the tower by entering through the narrow gates which led to a steep circular staircase. The staircase is narrow as well so one has to be careful while climbing as people are coming down at the same time from the stairs. There is no means of any light source inside the tower but there are tiny windows present for that purpose. 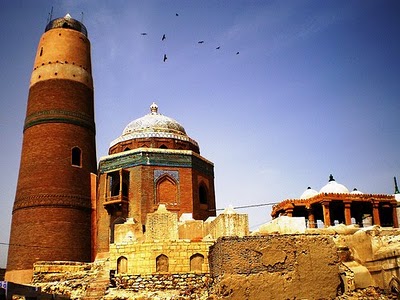 Reaching the top one can find people hanging out here and there especially women and children who are sitting in the small canopy while the children play along the iron cage. But the most interesting part in reaching the top is the marvelous view of whole of Sukkur. One can see almost the entire city from that point including the Jamia Mosque, the clock tower, the river and the barrage, Adam Sha ji Takri (The Hill of Adam Shah and the most of all the spread of the city.

We take some photos of the places we visited and after sightseeing we are insisted by our host`s guard to by a souvenir from a nearby place. We went down to the shop which was seemingly like any other crowded market in Karachi. 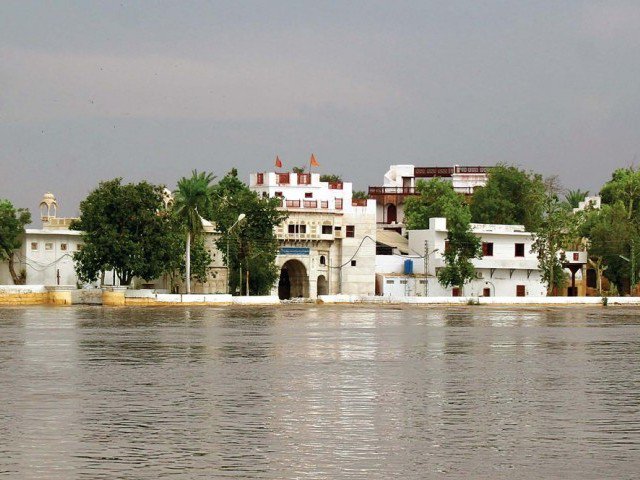 We decided to travel to an ancient temple almost dating back to the 18th century known as the Sadhu Belo which is situated on an island off the River Indus. The Indus has been cam for a while since the 2010 floods when even Sukkur was put on high alert for possible dangerous rise in the water level.

The legend says that there was a Sadhu named Baba Ban Khundi who came to live on the island in around 1832 in order to preach Hinduism. It is said that this island was a gift to him from the then ruler of the area Mir Sohrab Khan who was very much impressed by his wisdom. We had a boat to take us there and we were also accompanied by a Hindu family who were going to visit the temple as well. 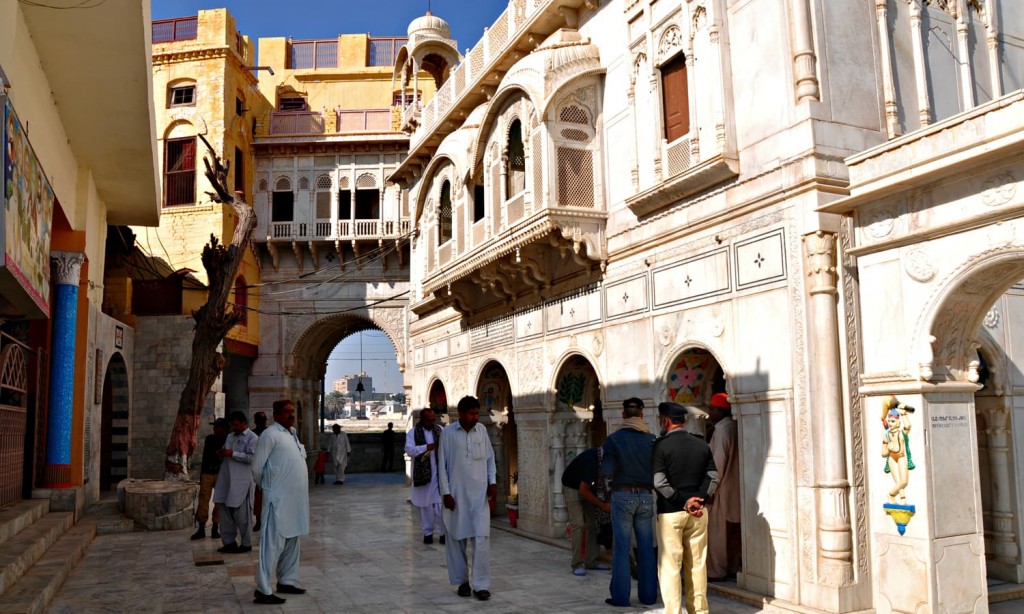 There are many other views to get a glimpse of like the Sukkur Barrage on one end and Lansdowne Bridge on the other. We are greeted by a priest upon entering the shrine and immediately we are absorbed into the marvelous marble work in the compound.

There are different sort of tableaux engraved on the side of the entrances. They depict specifically the consequences of one`s choices upon which they punished and rewarded. I was amazed to see the details of the work which I had not seen of this quality before in interior Sindh.

There are balconies on each side walking past the entrance. We are then taken to the place inside the compound where the Shivling is kept and we are awestruck by the handiwork done on the walls and roof while the marble glows off in the sunshine outside.

We are taken to the library as well as the priest got to know of the novelist in our trio. There are many chambers around the compound which shows that they might be used to house the pilgrims who visited this place.

We visited the library which was full of Hindu mythology and after the tour around it we went outside to enjoy a peaceful walk along the river. 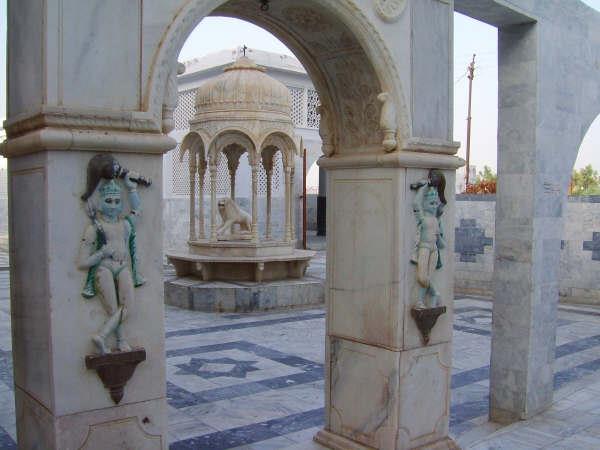 The island is full of trees which I identified as Neem, Acacia, peepal and some other local kind but they weren’t all recognizable. The sun was setting and it couldn’t get any more peaceful than that time. We then took tour of the other small temples on the island which belonged to Hindu gods like Hanuman, Ganesh and many others.

On the right bank of the river, I saw a graveyard from the boat and upon asking it was said to be Satyun-jo-Astaan: the Abode of Seven. We decided to discover the place and drove through Lansdowne Bridge constructed by the Viceroy of India, Lord Lansdowne in 1889. Below the bridge is the shrine of Zindapir.

There are many stories associated with the bridge. Some say that because the engineers weren’t sure about its stability so they let a train full of prisoners to be punished to cross the bridge and when they succeeded in crossing the bridge they were pardoned. 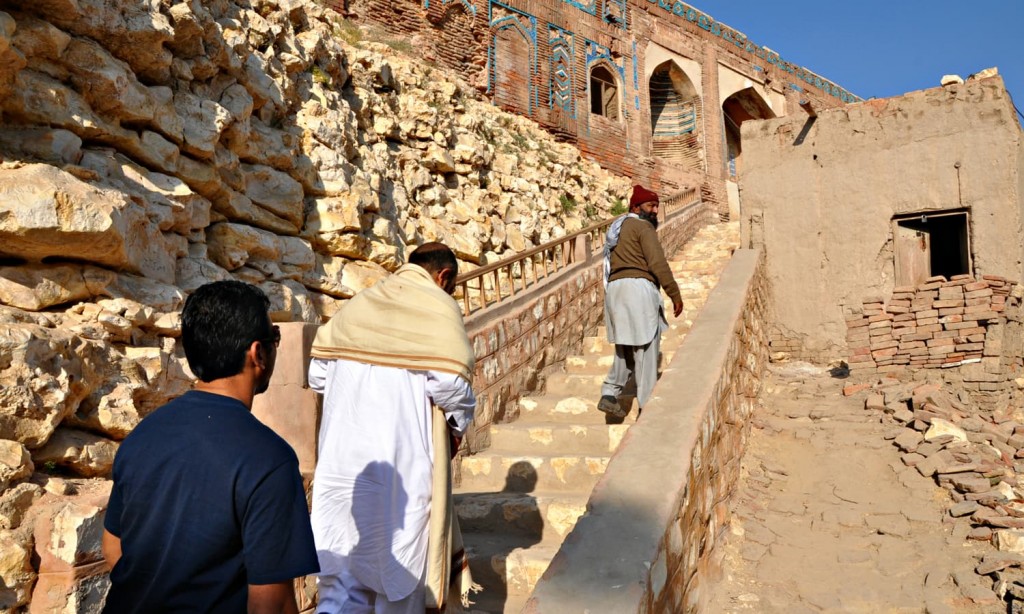 We reach the shrine and park our and enter the shrine through a staircase. The caretaker informed us that the place takes its name from folklore some centuries ago when according to a legend some prince chased down seven pious women in order to kidnap them and they ran to this place for refuge. Hey prayed to God for mercy and so the floor split opened and swallowed them whole. The shrine is a women popular place as only women are allowed inside and they visit this place with a hope that it is said that they can be relieved of their sufferings here.

Walking further at the top of the mound there is a graveyard. The yellow stoned graves have some carvings on them which seemed beautiful. One of the graves was of the governor of Bakhar, Mir Abul Qasim.

The journey had been alive and wonderful, this barren land still has many lively and serene things left in it which made this trip worthwhile.