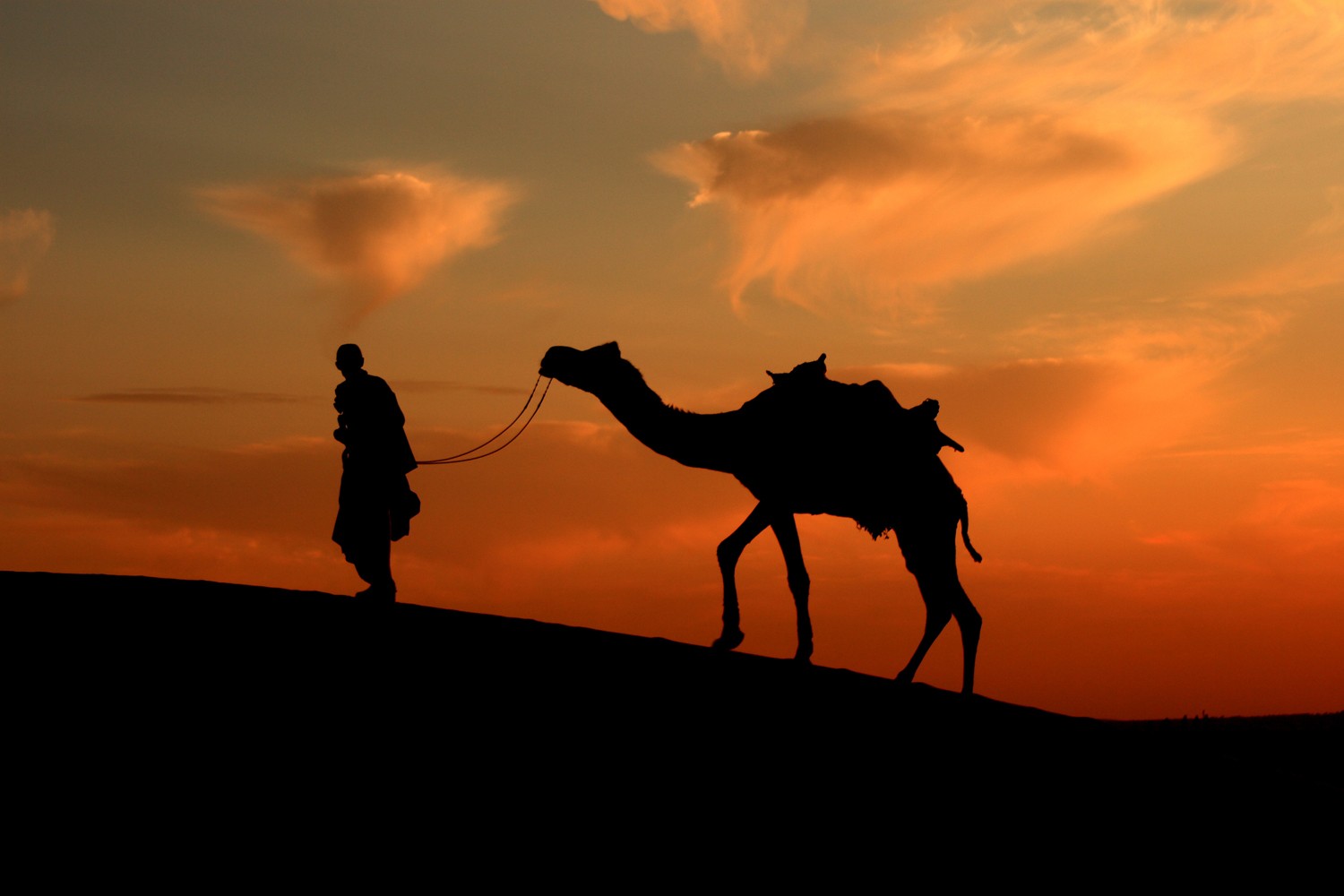 These words were said to me by when the sun was setting on the Umerkot fort and I was standing on a bridge in the middle of the fort where I could see far and wide. Whoever had built this fort must have had some authentic thinking and intellectual to go with it. If you see to the East of the fort you would see sand dunes and to the west there is no sign of sand but the land is covered with a white beautiful sheet upon which greenery and crops dance in the wind.

When I asked Sardar Bheyo that whether Thar starts or ends from this place he became quite surprised with my question and murmured something like ‘ends here, starts here’ which did not look like an answer to my question. Though it is true that there is no end or start to a sea or a desert so no one can ever know from where they begin and where is their destination like he soaring birds or the clouds which have no limit to where they go.

The desert of Thar is spread over thousands of kilometers being world`s 19th largest desert and 9th largest sub-tropical desert. 85% of the total land is in India while the remaining is in Pakistan.

According to Sindh gazetteer the ar 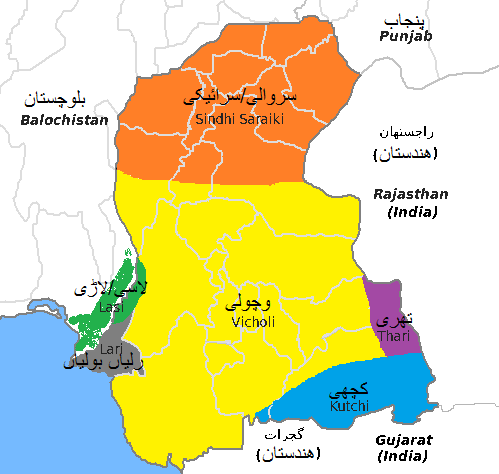 ea of the Thar Desert is spread out at 10524 miles. Though there aren’t many sand dunes in the north of the desert but there are considerable amount of dunes in the south.

After studying the objective conditions of this desert, Captain Rhikes writes almost 170 years back about Thar, “Cropping is done in between the sand dunes where the ground is smooth that’s why the crops are grown on a limited land. The land between the dunes becomes green with grass after rain. Many types of grasses and herbs grow here which are considerably much stronger than rest of the places. The locals here mostly live by these grasses, herbs and livestock. The people and their properties here are unsafe so they have to think in advance for the better of their lives”. It is unfortunate to know that the condition after 170 years is still the same.

When on the second morning we travelled out of the Umerkot city towards south to a small village where in grass huts made out of straws handmade carpets are made and there were also many houses which`s terraces and walls were made out of white sand which stood out. The women sat in the courtyards to make colorful sprees and quilts which are a source of income as well as a hobby. When I got out of the village it was then I realized that these few days aren’t enough to admire the vast beauty and landscape of Thar.

We said goodbye to Umerkot and again travelled towards south to Islamkot and then towards north. When you travel a bit from towards south one would feel that he has entered into a new world. Dozens of dunes of sands stretched out in this land feels like waves of an ocean when the car climbs over one dunes and moves down the other the next second like the water waves.

They say that Thar is the name of four things, sand, camels, clasps and mystics. 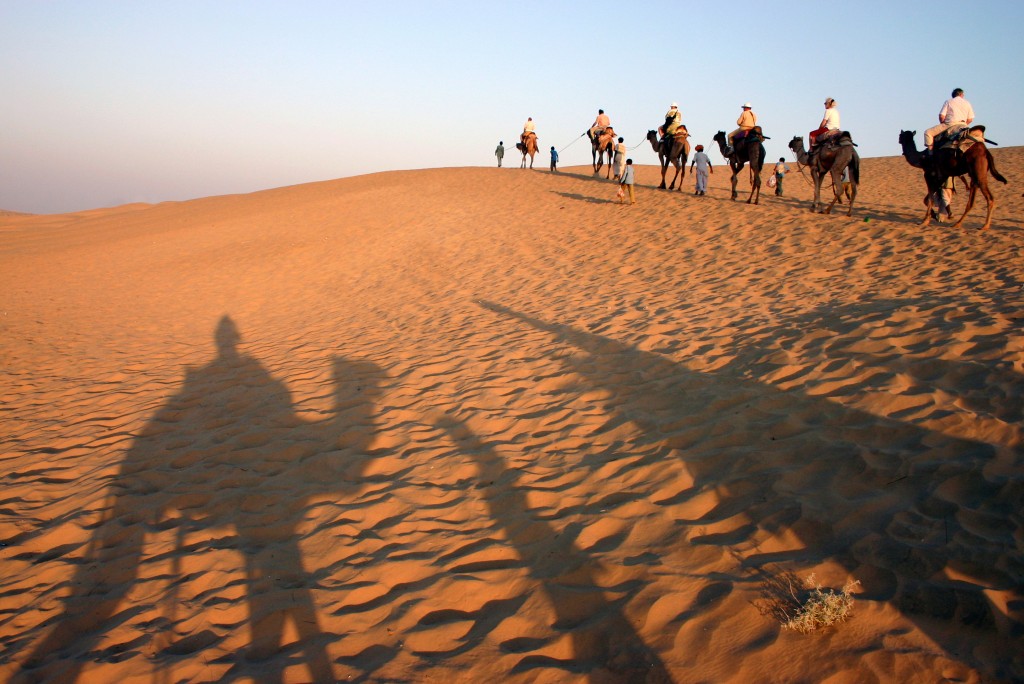 We haven’t see any camels so far but we see a new growing crop of Apple of Sodom, whose big leafy structure with white flowers having purple tinges on the corners increase its beauty even more. When you take a bunch between your fingers it feels as if many little children and playing and when you let them flow in the air again they dance with the blowing wind. They are spread over as far as your eye can see.

Travelling you would see between the sand dunes some seeds sown into the ground which includes parley, peanuts, sesame and many other types of crops and vegetables are grown.  In these grounds the prosopic cineraria trees are also planted under which one can see some children or women resting every now and then. A well can also be seen near the settlings and village. 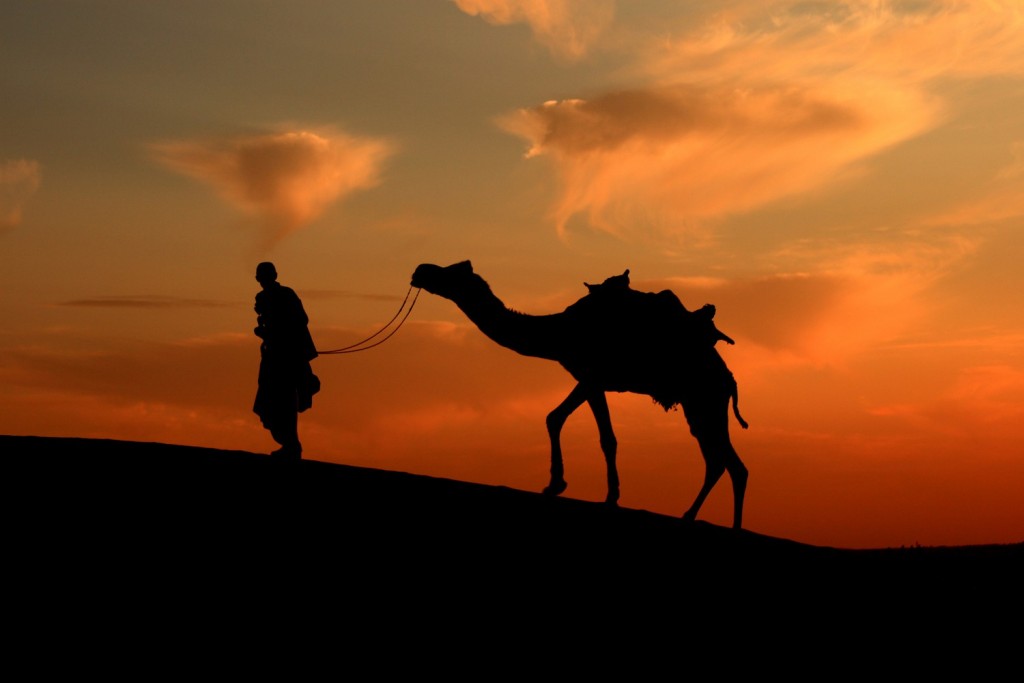 On the way you can see a herd of goats every now and then on sand dunes and even camels can be sighted here and there who stare and chew more than they eat. There had been fresh rain so we could see some children there carrying polyethen bag in which they were carrying mushroom which grow in this season. They say mushroom based gravy is very delicious.

When I asked a little girl carrying a bag of mushrooms that how long she was standing there and instead of answering she just put her veil in her mouth very innocently which touched my heart and I bought a bag from her and gave her my blessings. When we were about to go she innocently said “water” and I gave her a bottle of water which put such a heavenly smile on her face like the greenery of Thar. 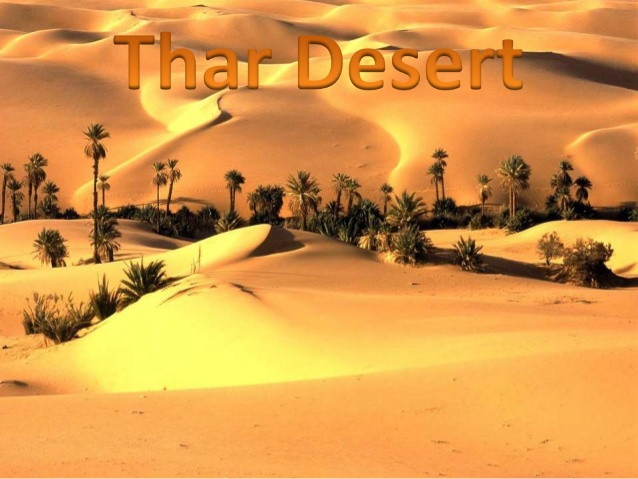 When we reached Islamkot the market was full of people going here and there. We reached Sanat Neenoram Hermitage where there was crowd too and a big feast was in place. People come here, eat and go.

The caretaker here named Lashmandas told us that more than 300 to 400 people come here to eat and whoever comes here will always get food. He also told that everyday more than 150 kilos of feed is fed to birds. “this is the providence from the believers we are just the way to bring them to other”, he said.

When we went out from Islamkot to Gortimandar and Bhalwa then again we see the glory of the sand dunes and the straw houses that we spot every now and then which are covered with Broom Brush and they say that which house is sheltered with Broom Brush will not wash away.

We moved forward and saw Desert teak along the edges upon which beautiful flowers were settled which are said to bloom from March to May but sometimes they bloom off-season as well and it’s a rare sight to see that a tree grows flowers according to its mood, funny enough. 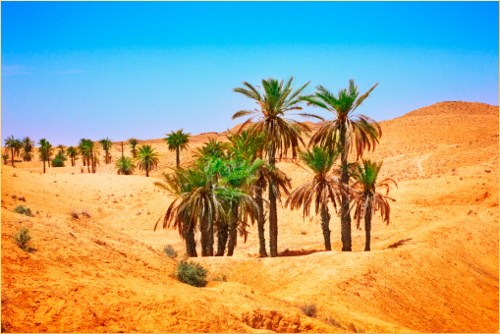 I asked a famous write of Thar, Jogi Khalid about this tree and according to him, “do not clasp or put an axe to the neem and whoever cuts the Desert teak would face an end to his generation.” The people of Thar are very close to nature and they all love their flora and fauna, the land and the grass with great intensity. One can estimate the beauty of Thar when they see the Desert teak forests and how beautiful the flowers look upon them. The most expensive wood in the market is of this tree and according to the writer that Thar is mingled with colors of the Desert teak.

The more you move towards south the lesser the dunes become and even the color of the sand changes. There is white sand at Umerkot and if you travel north of Umerkot the sand becomes even whiter. And if travel south then first the sand is white then it becomes a bit brownish and then yellowish while the grains of the sand also become a bit heavy.

20 kilometers before “Veerawah” through the main road towards East to a village there goes a link road. You go towards North through Gordi village and find a temple of Jain Dharma. The temple was very much destroyed in the 1898 earthquake but the inside is kept clean and maintained as the Department of Archaeology has appointed a caretaker for this place. Wouldn’t it have been better if they would have appointed a caretaker for every place? 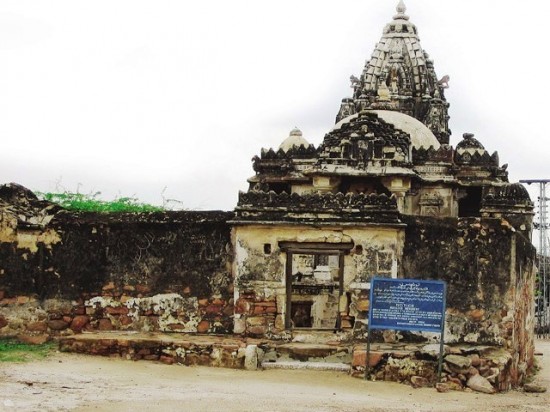 From Gordi temple we move a few kilometers towards east where we get onto a link road which leads to “Bahalwa”, the famous well around which the story popular story of Umar Marwi is related to. They say this is the well from which Umar took Marwi and looked her in the Umerkot fort. The well has been protected by putting walls on all four sides by the Department of Archaeology. When you go through the walls, people welcome you in their harmonious voices and with songs. There is still water in the well which is still used by people.

When we returned from the well the sun had gone down and we travelled to a link road towards west. This place is called “Sundar” which means beautiful and indeed the cold breeze over the sand dunes looked and felt amazing and so did the running horses. When we reached the village Malsaryo Mir Mohammad Sammo, night had fallen and there was darkness all around. This whole place fills your soul with the cold wind that contains the smell of the sand.

When you reach Parinagar some concrete houses, shops, small hotels and huts await you. Looks can be deceiving, this place was a popular stop once with a good population of about 40, 000 people. History tells us that the ancestors of Mohandas Karam Chand Gandhi were from here. But now the scenery has changed and the people have become distant stories. 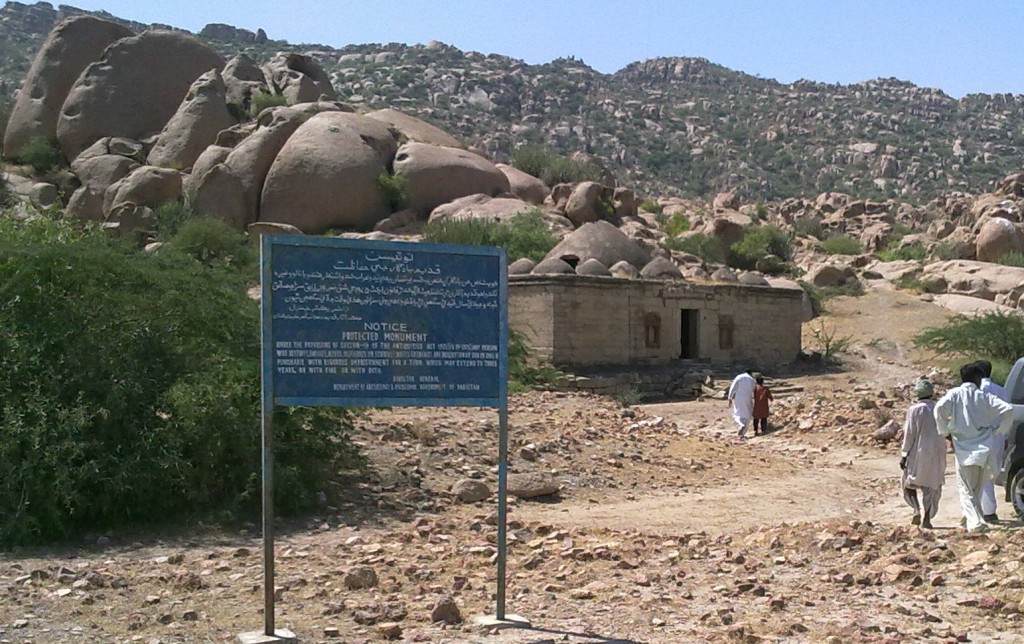 When you move towards south, the size of the mountains and dunes become bigger. Then from a distant which I thought to be a sand dune covered with fog appears to be a place decorated with greenery known as “Karoonjhar” and sitting in its lap is the beautiful “Nangarparker”. Before this there is a link road going towards west and there in the middle of lush greenery is a beautiful mosque built in 1505 by Mahmood Shah Begra who was the ruler of Gujrat from 1459 to 1511.

An old man was sitting outside the walls of the mosque selling herbs. I went to him and asked that whether his herbs sell and not and he immediately reply that they did and with good amount so I asked whether they sell all year along and he replied that they sell in the 2 3 months and it is enough for him to spend.

These are the qualities that enlighten the people of Thar and the place itself. The simplicity of its scenery as well as people makes you want to visit this place again and again. Though this place and its vulnerable people have been badly neglected by the government but it still holds its ground and beauty to attract people towards this land of sand dunes and greenery which holds the most down to earth people and places which emits aura of utmost serenity and peace which in itself is a gift of nature not enfolded by fame or fortune but with reality. It is the duty of all the nation and government to provide every need to the people of Thar and the land itself. 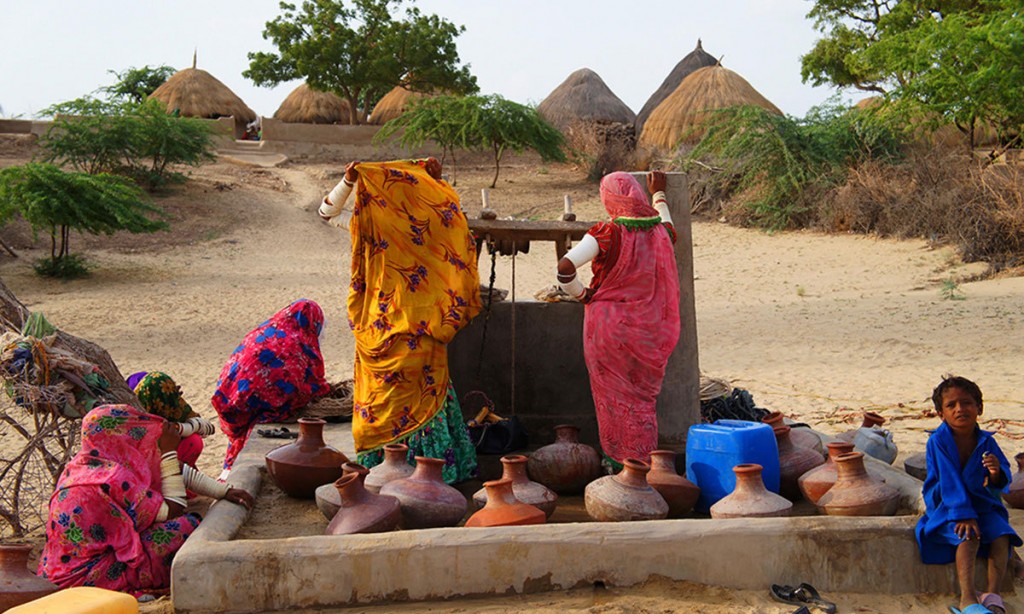