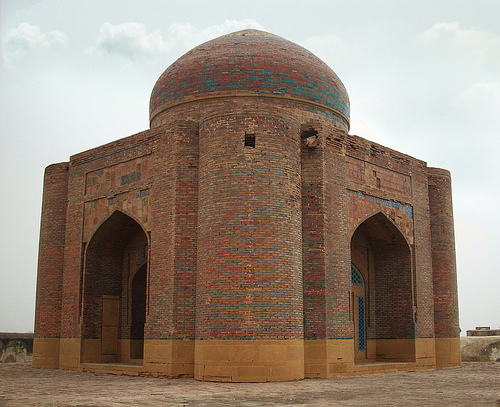 The capital of 3 successive reigns and after that governed by the Mughal emperors of Delhi, Thatta was continually adorned from 14th to 18th century. The remnants of the city and its cemetery contribute distinctive scenery of civilization in Sindh.

Near the peak of the delta of Indus River in the southern province Sindh of Pakistan is a gigantic necropolis assessing more than half a million graves and tombs in the total area of 10 km2. Established at the edge of 6.5 km large plateau of Makli Hill, the cemetery of Makli – which was connected with the city Thatta, which was used to be once the capital of Islamic culture – certifies in a remarkable process to the Sindh’s civilization.

The enormous cemetery of Makli is included among the greatest necropolis in the world. Queens, scholars, kings, saints, governors and philosophers are buried in this sacred city in brick monuments, few of them are elegantly embellished with glazed tiles. Though, among the superb monuments established in stones are the Jam Nizamuddin II tomb, who ruled for 1461 to 1509, and of Isa Khan Tarkhan the Younger and of his father Jan Baba tomb, both of their mausoleum was developed before 1644. The most attractive and colorful is that of Diwan Shurfa Khan Tomb. The distinctive assemblage of enormous structures depicts a marvelous order of ancient buildings in unique architectural modes. These buildings are eminent for their combination of divergent influences into a regional style. These influences involve Hindu Architecture of Gujarti mode and Mughal dynasty style. Unique Asian and Persian instances of architectural cemetery and terra-cotta were also provided to Makli and modified. A genuine concept of stone embellishment was developed at Makli, although demonstrated by the decoration of glazed and painted tile styles. The ancient monuments at the cemetery of Makli determined as graceful declarations to the political and social background of Sindh.

Within the limitations of the land are situated all the components and elements essential to display the Remarkable Universal Worth of this property, involving the tombs and graves situated in cemetery of Makli. Nonetheless, increasing number of ancient monuments has approached a modern stage of degradation. The honor of the land is risked by the immense decay caused by natural disasters and the transition of the river bed. Additionally, vandalism and encroachments have risked the site, and destruction and loss by burglary have assumed massive proportions.

The ancient monuments at Makli and Thatta are legitimated in terms of their styles, materials, substance, locality, design and settings. Although, the components of the location are in the initial stage of decay, the legitimacy of the structure is in danger, specifically considering the substance and styles of monuments. Until the precautionary action is taken to lessen the risks to the structure, immense damage will be happened.

The ancient monument at Makil and Thatta is a secured structure in terms of Antiquities Act, 1975, passed by the parliament of Pakistan. The Constitution Act 2010 ensured the government of Sindh with full legal authorities to protect over all architectural sites situated in province. The Culture Department of provincial government of Sindh is responsible for the security and management of the ancient monuments at Makli, Thatta. The site is managed by the technical assistant, curator, supporting staff, archaeological conservator and attendants. The funds are provided by Sindh government which is considered to be insufficient for the protection of historical monuments.

To maintain the Remarkable Universal World of the property over time will need establishing and executing an emergency action strategy to deal the issues of security and management issues; improving, completing and executing the Important Master plan and Direction plan for the monuments; defining the concrete boundaries and establishing a condition report for all tombs and historical structures; taking adequate measures to improve and stabilize the tomb of Jam Nizamuddin II, and operating the overall monitoring and checking plan.