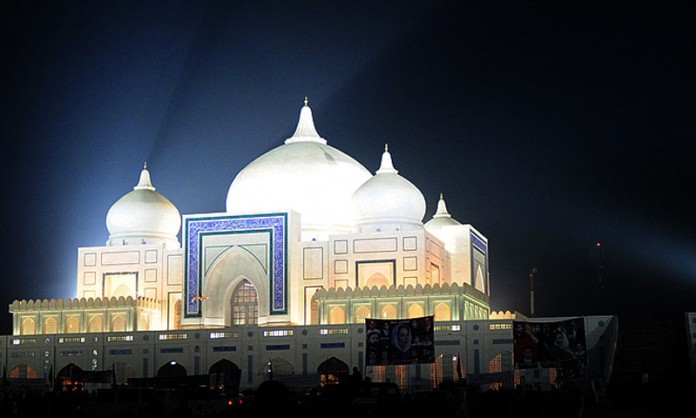 Garhi Khuda Baksh is all about Fantasy, especially if the person is taking tour of Bhutto family mausoleum at dark. On the night, the barren road to Garhi, the mausoleum makes an elegant scene from the night, showered in white illumination, a combination of Sufi Dargah, political identity and Mughal memorial site. Even though whatever the individuals think about the Pakistan Peoples Party, the monument is breath-taking.

Possibly considering the character those sepulchers inside it have participated in the politics, it may be a striking monument, particularly believing the Bhutto’s honor as a political national hero in Sindh. Ultimately, as one government formally reported at the mausoleum told that many tourists and people come here to bestow their prayers and respect to the personalities of Zulfiqar Ali Bhutto and Benazir Bhutto while some visitors also come to “have the response of their invocations.”

Imagining the disastrous way in which both daughter and father died, probably such occurrence is comprehensible, particula

rly when one trusts the powerful culture of commitment to Sufi glorified souls in Sindh; though, it’s not astonishing that BB and ZAB have developed into the “martyrs” of politics and with nearly “emblematic” atmosphere related to them in Sindh. Although both were devoted leaders in actual life but never distant from the turbulence and courage of politics, in death they have never been canonized, specifically by their devotees in Sindh.

During the death anniversary of BB, the whole atmosphere in Larkana, a home place of Bhuttos and its locality, is far away from shadowy cast. Actually, the one travels through itself by the roads of Larkana, Garhi Khuda Baksh and Naudero, the feeling of being there is just similar to attending a political festival.

While the path through Garhi Baksh as well as in Larkana, the PPP has arranged proper camps to greet the supporters coming from all over Pakistan. Huge banners tolerating greater than life pictures of district, provincial; and local office-agents throng the banners, though the Bhuttos are also compressed in.

PPP melodies, involving their anthem “Dilan Teer Bijan”, screams out from sound systems, as their devotees set out to dance. In the sandy streets of Naudero, the band of youngsters and the Sindh Peoples Student Federation walk upraising the slogans and flapping the flag of PPP. The protection and security is all made compact, as the police officials guard the locality. The Interior of the mausoleum monument, although, was a new place.

A mob of PPP workers, passionate villagers and security people swarmed about. Though, the small mob was the consequence of intensive cold at the night time. To face the cold, the hawkers sold boiled eggs, poppadums, chaat and obviously a cup of hot tea.

The whole stage and decoration set up for the day was incredible; though it resembles to like a rock concert, illuminated with bright colors and light, pictures of BB and the whole family of Bhutto.

The mourn day of 27th December has changed to a yearly show of power for the Pakistan Peoples Party. The people of Naudero claims, “No other party has such great zeal in this location. People here have affection for the family of Bhutto. BB provided jobs to individuals. She not only played the role of politician but also a character of concerned mother.”

Though, that’s all is the main reason behind the Charisma of Bhutto in Sindh. Benazir Bhutto and Zulfiqar Ali Bhutto’s representative political heritage combined with the fact that no other party has such honor and respect in Sindh province to match the esteem of PPP. Despite of all the blames and corruptions, it will still be victorious to gain the votes of Sindhi people. Even if the damaged streets and tumbledown houses right in front of the mausoleum are an arena away from glittering monument inside the huge walls of the structure.