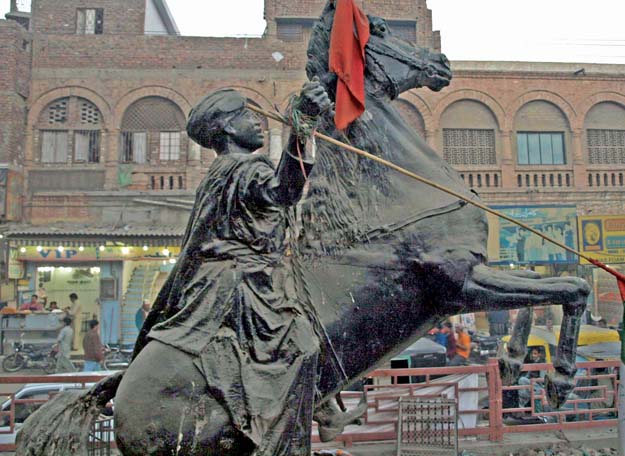 General Hosh Muhammad Sheedi, is one of that character of Sindh History, who voiced a slogan of “Marsoon Marsoon Par Sindh Na Desoon” (Will Die but never give Sindh). Hosh Muhammad Sheedi is still alive in the hearts of thousands of Sindhi People with his slogan.

Hosh Muhammad Sheedi, was born in 1801 A.D. He was an employee at a mansion of Mir Fateh Ali Khan. On March 23, 1843 he fought a historic fight with Mir Sher Muhammad for the country. The fight was fought at a distance of 8 kms from Hyderabad at Tando Allahyar.

A brother of Charles Napier, William Napier has briefed the personality of Hosh Muhammad Sheedi in his book ‘Conquest of Sindh’. William Napier has written in his book that the British defeat was so near in the war, and Sir Charles Napier was about to escape from the battle ground. Suddenly, some Mir betrayed Mir Sher Muhammad and blown up the fire to the explosives, which were stored at Narejo Village. By seeing the situation, British Army regain their strength. On that, Hosh Muhammad Sheedi suggested to Mir Sher Muhammad to leave the battle field and he fought himself there till his last breath and give his life for his country.

People believe that, Hosh Muhammad Sheedi is buried at Pakka Qila, Hyderabad, but many people also believe that he was buried in Narejo Village.

The great leader of Sindhi History, which has been erased from the history of Sindh, has no such aid from the Government or historical professionals to highlight the great personality of Sindh. Some nationalists and social parties also organize such gatherings for the remembrance of such great hero.

Chairman Sindh Taraqee Pasand Party (STPP), Mr. Qadir Magsi said that, Hosh Muhammad Sheedi is one of a memorable character of the history of Sindh. His slogan is a heartbeat of every Sindhi Soldier and is on the lips of every youth.